The Hospitals of Lochaber 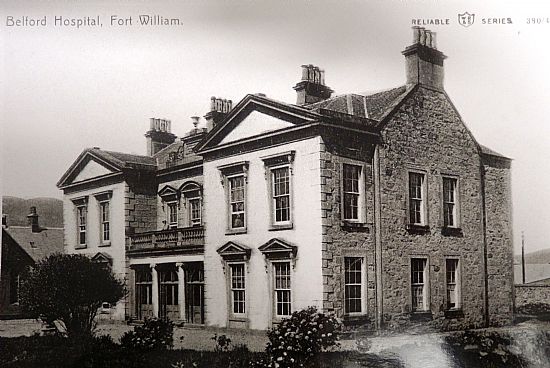 Until the 20th century, the rugged mountain terrain of the Lochaber area, combined with the subsistence economy of many of its inhabitants, ensured that access to medical care was often problematic.  However, the generosity of local solicitor Andrew Belford saw the Belford Hospital (above) established in 1865 at Fort William.  It was a substantial building which included fever wards and a commitment to admit maternity cases (many hospitals did not have this then).  The only other general hospital in the area was the small one at Glengarry which acted only as a base for the district nurse.  The very small St Joseph’s Hospital in Fort Augusts seems to have mainly catered for railway workers around 1900 and closed soon after.

Industrial hospitals in a rural area seem paradoxical but the very rurality of Lochaber necessitated temporary remote hospitals during late 19th century railway building.  In the 1890s, the new aluminium industry opened a small hospital at Foyer and later had temporary field hospitals near their dam building works.

From 1889, local authorities were obliged to provide fever hospitals and cooperated with the Belford Hospital Trustees to build the Belford Fever Hospital in the hospital grounds. They later opened the Victoria Smallpox Hospital at nearby Airds.  Further south, the Ballachulish Fever Hospital opened in the converted large house Craiglinnhe.  To the north, the voluntary Inverness shire Sanatorium opened in 1907 at Glengarry.

There are many examples of temporary wartime hospitals across the Highlands.  During the two World Wars, the Lochaber area became effectively one large military training ground and several large houses such as the Lochiel Arms Hotel and Fort Augustus Abbey were given over as military hospitals, some run by the Red Cross.  In World War 2, Glencoe House and Craigdhu at Onich became military hospitals.

All of these hospitals have now closed, the only remaining hospital being the new Belford Hospital which opened in 1965 a century after the founding of the original one.

The Hospitals of Lochaber booklet was published in 2014.  It contains many more details on the hospitals of this beautiful area.  Given that it now has been in print for 8 years we have decided to offer the remaining copies at a reduced price and have adjusted the price to £4.50 which includes mailing costs.  At present (August 2022) the West Highland Museum is offering it over the counter at £2.00.