We have just discovered this temporary military hospital in Inverness.  You can read all about it here!

Hospitals of Badenoch and Strathspey

You will see from our new page that we have an addition to our collection.  NHS Highland opened the new Badenoch and Strathspey hospital at Aviemore to replace the existing hospitals at Grantown on Spey (the Ian Charles Community Hospital) and at Kingussie (St Vincent's Community Hospital) which had more than a century each of service.  To mark the occasion Kenny Rodgers, Project Manager, secured printing costs from NHS Highland Endowments which allowed complimentary copies to be given to those associated with the project including all NHS staff in Badenoch and Strathspey and also to make other copies available.  We are pleased to waive any other costs in producing the book and make it available free of charge.  The only cost if it is sent by us will be the postage and packing.

We are also grateful to Kenny and to Dr Peter Grant of Grantown on Spey for their help in identifying contacts for information and both also contributed to the text in the book – a first for us.  Bill Saddler of the Grantown Society was also particularly helpful and the many others who helped are acknowledged on the Badenoch and Strathspey page.

Steve and Jim were honoured to be asked to make an illustrated presentation at the opening ceremony of the new hospital.

We were all set to launch The Hospitals of Ross and Cromarty but were overtaken by Covid19.  The manuscript is sitting here awaiting more faourable times but we intend to publish it as soon as we can.  Our grateful thanks to the many people who helped us with the research.

Meanwhile we are pressing on with researching The Hospitals of Sutherland and Caithness which is well underway now.

After 12 years of research we didnt expect to find any more hospitals in the Highlands but we hadn't come across the World War 1 hospital at Ardgay which existed from 1917-1918 to serve the New England foresters who came across to help the war effort. We have few details but it moved into Ardgay House in late 1917 and its matron was Miss Neil.  We would be delighted to hear from anyone with more details.

This was a return evening visits for those who had been unable to come along on the previous afternoon talk.  As before, a most welcoming and interested audience!

A warm welcome and much interest shown.  Good to catch up with Jim's former colleague DJ MacLeod!

The Hospitals of the Highlands

in the Highlands over the past two centuries.

A very welcoming event and good to catch up with JIm's old friend Elspeth Macrae!

Jim gave a talk about the history of Highland hospitals focusing on Inverness to a very interested and welcoming audience.

Jim and Steve joined Dr David Alston to give talks to well over 100 guests as the Highland Archive Centre celebrated 70 years of the NHS.  Congratulations to the Archive staff and to Lorna Steel for organising a superb conference.  The atmosphere was superb - welcoming, busy and engaging.  The Highland Archive Staff also put on a comprehensive display of some of the excellent archives held here at this first class facility. Most impressive!

Eight Centuries of Healthcare in the Highlands

Steve and Jim were invited to present along with others in an interesting combination.  Professor Alasdair Munro started proceedings by looking at the work of the the Beatons - hereditary Gaelic Healers in the Highlands.  Jim then continued with a brief outline of the evolution of types Highland hospital from 1800 onwards.  Steve followed by looking at changes in the number of hospital beds in Highland over the last 200 years and some of the reasons such as changes in medical treatments, with a specific focus on the last 20 years. Dr Alasdair Mort concluded the presentations with a look at recent developments in technology.  The event then concluded with a short question and answer session to the speakers.  Throughout it was chaired by Professor Dave Godden of the Nairn Arts.

It was most lively and interesting.  Steve was unfortunately double booked and was actually in Ireland but had recorded his presentation in advance and this went down very well.  Jim and Moira, who used to live in Nairn, caught up with some great old friends.

Jim and Moira had a very pleasant visit to Fort Augustus at its best on a beautiful sunny day and received a very warm welcome from the Heritage Group who have been doing some extensive local research including into the Invergarry Sanatorium and had uncovered some good information which we had not seen before.  We also discussed the short-lived St Josephs Hospital but despite the fact that the building still exists none of us know any more than the list Jim had put up on his slide which is as follows.

1880s  Fort Augustus Abbey converts former farmhouse to a hospital and made it available to the local community.

1891 Not listed as a hospital in that year's census.

1898 An bed extension funded by public subscription Several serious cases around this time treated by Dr MacFadyen, the local doctor, and matron Mary Chisholm.  Heritage Group who know the property think that 8 beds is a bit ambitious for the space created!

1900-04 Miss Rawlins listed as matron in the valuation roll but no-one thereafter.

1901 That year's census lists a seamstress in residence. 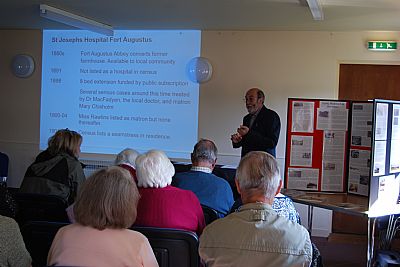 We also looked at the Red Cross Auxiliary (VAD) Hospital which was opened at the Abbey during World War 1 and the Heritage Group have again discovered quite a lot of information locally although no-one could identify anyone from the photograph below which Jim had received from Jamie at the Inverness Courier who had been sent it by a member of the public looking for information. 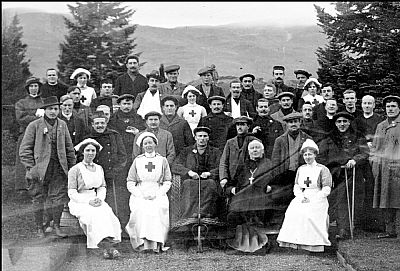 We really enjoyed our visit. It was informative and stimulating with lots of searching questions! If you have any information on either of these two hospitals do please get in touch!

Very enthusiastic and many thanks to Ivy for some very useful resources.

Impressively large and enthusiastic society! Moira was there with the camera.

Many thanks again to Morag (picture on right) for again adding to my knowledge of Sutherland hospitals - much appreciated.

A large and most welcoming gathering.

This was Jim's fourth visit to the excellent History Forum.  Some very enthusiastic feedback and very enjoyable.

Steve and Jim did a double act on this occasion. As suspected, Cromarty History Society members were an attentive and discerning audience and we came away with some good pointers for future research.  Many thanks to them for their excellent hospitality.

This was Jim's third visit to the History Forum  which does such sterling work in researching and publishing local history.  As always, an excellent opportunity to see old friends and to learn a lot!

This talk was very much on our home territory!  Jim had a very warm welcome at the Parish Church Hall (and an excellent afternoon tea!) and there was much interest shown with some lively discussion.  Many thanks to all and to those who gave us some very interesting and useful information for our current research into the Hospitals of Ross and Cromarty.

Very many thanks to over 80 attendees who came to our book launch and were so enthusiastic about the history of Inverness hospitals.  Many thanks also to many others who could not come along but who sent us their best wishes.  We planned initially for around 40 but on the day there were over 80 in attendance (some are shown below) and we sold out on the books we had brought along!  Many thanks to Phil Downie who very generously took these excellent photographs on the day and to Moira Leslie whose skill at conference organisation was once again confirmed. 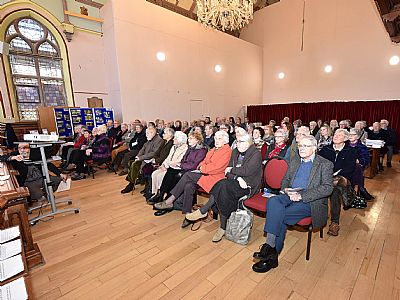 We were most grateful to Provost Carmichael for granting us the use of the Town House and for opening the event. 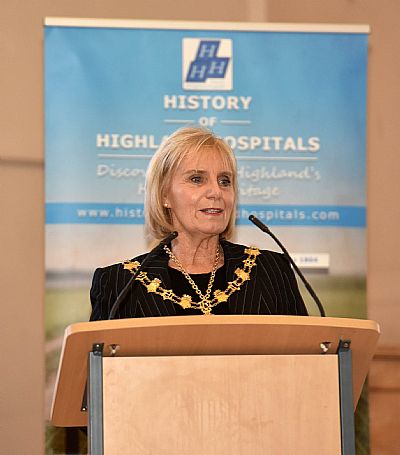 Steve Leslie gave the background to the History of Highland Hospitals Project and to the general evolution of health care in the Highlands. 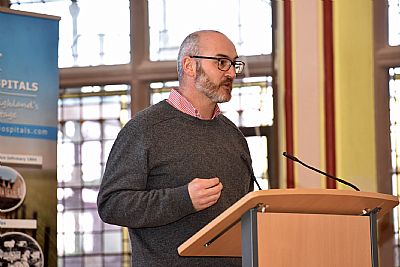 Dr David Alston gave a succinct and witty introduction to the Hospitals of Inverness. 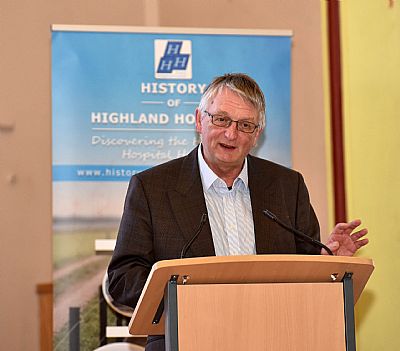 Jim Leslie gave an overview of the changes in Inverness social history as discovered through a study of hospital history.  He also described a very interesting source – a diary kept by Brian Sturrock – when as a teenager he spent many months in Raignore orthopaedic wards.  His daughters Linda and Dianne attended the launch (below) .  Linda (on the right) is typing up her Dad’s diary and Jim had printed off and brought along the story so far (it is now complete). 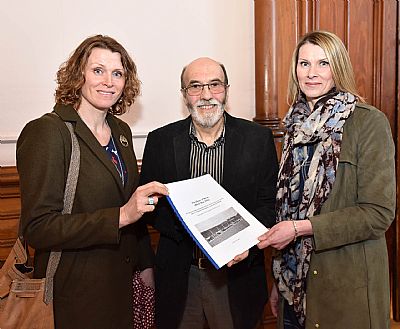 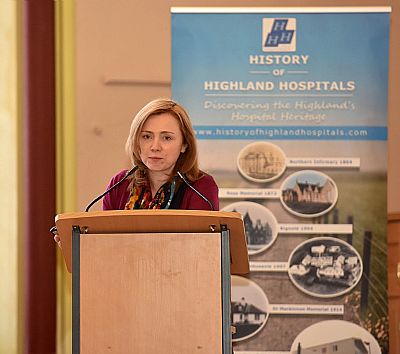 We were very fortunate that so many people with links to our project were able to come along. 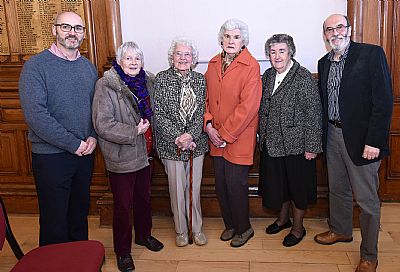 Jim and Steve are seen above with (from left to right) Mrs Elspeth MacRae who as well as giving a lot of information on Old Raigmore hospital, had preserved a set of original photographs from William Browne’s book which she has deposited in the Highland Archives; Mrs Netta MacIntyre who – unbelieveably from her photo -  trained in the RNI in the early 1940s, discovered the fever hospital drawing of the unknown hospital included in the book; Miss Elspeth Luke who supplied pictures and information on her grandfather Mr Luke - the first specialist surgeon to the RNI in 1910 and Mrs Dolly Paterson, retired nurse and enthusiast for our heritage who inspired Jim with many sources when visited early on in his researches. 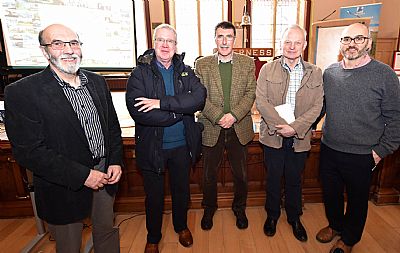 When we started off our search project in 2008 we had the support of a committee, members of which joined us for the event.  Above with Jim and Steve above are (left to right) Professor James Hunter former Head of Centre for History UHI, Dr Ken Proctor retired Associate Director of NHS and Professor Alasdair Murnro retired surgeon and Chair of the Centre of Health Sciences.

We are also honoured that members of the Inverness Local History Forum (below) were able to attend. 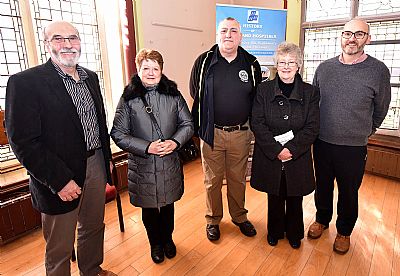 Talks to Local Groups and Societies

To date, we have given over 50 talks to local groups from as far apart as Nairn, Grantown on Spey, Golspie, Portree and Ballachulish.

When the new hospital opened at Nairn in 2010, Jim gave a brief history of the hospital at it's opening ceremony.  We then translated the talk into a free standing 'powerpoint' presentation with a mix of text and picture which the hospital has kindly been running on its waiting room plasma screens ever since.

In 2012, we had a request for a similiar presentation for the Out Patient department at Raigmore Hospital, Inverness.  We compiled a free standing History of Highland Hospitals - similar to Nairn's but much larger.  It is now in its second edition.  It is very popular with out patients and we get a lot of feedback.

Recently, one out patient asked if we had a DVD version.  We hadn't but thought it an excellent idea and with some help made an attempt to form a DVD version.  Initial results suggest it needs much more development.